Today in our 'Leaders in Local' series, we visit 5RM & Magic 93.1, broadcasting across the vibrant Riverland and Mallee regions in South Australia.

Here are just some of the things our energetic 5RM & Magic 93.1 teams have been up to in the local community:

The broadcasting of the RFL Finals was a huge success!

Lachie Winnall called the game with the help of Trevor 'Nobby' Norton and Brendan Lines, supported by the fantastic 5RM team.

We look forward to more local live broadcasts next year!

Not Quite the Riverland Field Days

Despite the official Riverland Field Days being cancelled due to the pandemic.

Brooke and Bob insisted the show must go on, and so, it did! Whitey broadcast live from Rollbusch Quality Meats in Barmera, also helping to sample the tasty treats like the new in-house made Hickory/Maple bacon and Savs made from scratch to an old traditional recipe!

For just a gold coin donation, passers-by enjoyed the award-winning Beef BBQ Snags from the barbie with proceeds going to the Barmera Opp-shop. Brooke and Bob visited a local CFS where Brooke tried to get dressed in the uniform as fast as possible.

It was safe to say Brooke has a new appreciation for how hard First Responders work, and we also realised that if our house was burning, we wouldn't be calling Brooke!

Whitey was broadcasting live again, this time from Riverland Steel for their Drought Buster Trade Day.

Of course, the grill was also on! Brooke & Bob Celebrate Bev's 20 Years of Volunteering With the Salvos

Out and about in the Riverland, Brooke & Bob stopped by to celebrate Bev's 20 years of volunteering with the Salvos! Complete with the obligatory sausage sizzle. Earlier in the month, Brooke & Bob popped into the Salvos Berri store to find out more about the Red Shield Appeal, and pop some tags of course!

5RM & Magic 93.1 participated in The Biggest Morning Tea, organised by Nancy Murdoch and the team from the Riverland branch of the Cancer Council in conjunction with the Berri Barmera Council.

Besides raising over $1000, it gave our hard-working team the chance to relax with a cup of tea and a scone or two. 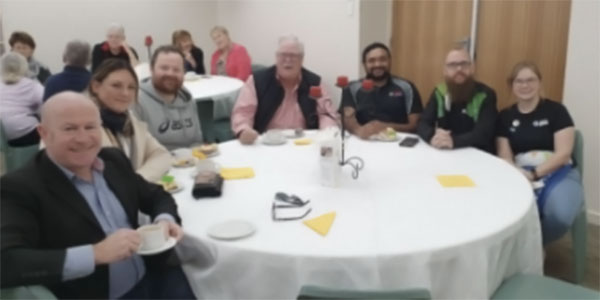 The Easter long weekend saw the return of the 5RM Free Easter Breakfast; with the help of the Rotary Club and other local businesses, the event was a huge success.

An estimated 800 locals and tourists dropped by and the feedback from the event has been excellent.

What an extraordinary event!

Ski for Life has traversed The River Murray over three days from Murray Bridge through Morgan, Cadell, Waikerie, Cobdogla, Loxton, Berri and all places in between. Finishing in Renmark in front of the Renmark Club.

5RM Breakfast host Anthony Milich broadcast live as team members and supporters welcome all the teams back safe and sound.